The Pros and Cons of Paying Off Your Debt Early – Fyifli

The Pros and Cons of Paying Off Your Debt Early

by admin
in Finance
0

Debt stinks. We all know this. The sensible move here is to pay off any and all debts as soon as possible, right? Not so fast. In some cases, paying a debt off early doesn’t save you all that much money. Let’s take a look at the pros and cons of paying down debt before you have to.

Pro: You’ll save thousands of dollars in interest

You can’t take out a loan without paying interest. You also can’t carry a credit card balance without paying interest. And the longer you owe money, the more interest you’ll pay. Let’s say you buy a car for the price of $25,000, and you borrow $20,000 at an interest rate of 3 percent on a 60-month loan. That could mean more than $1,500 in interest payments over the course of five years. What a waste, right?

So whether it’s a car loan or credit card debt, the sooner you wipe it out, the more money you’ll save in interest payments, and depending on the balance, this could mean hundreds or even thousands of dollars. (See also: 15 Tips From People Who Paid Off an Incredible Amount of Debt)

Con: You may have paid off most of the loan interest already

For example, let’s say you have a 30-year loan of $300,000 with a 5 percent interest rate. Using this handy amortization calculator, this means you’ll pay $1,610 per month. (For simplicity purposes, I am not including taxes and insurance in this calculation.) A typical amortization schedule shows that you will pay $1,250 per month in interest payments at first. But toward the end of the lending period, your interest payments are much lower. By the time you have three years left on the loan, you’ll pay a little over $200 in interest per month and it will continue to decline from there.

If you are fairly late in the loan term, there’s not a major financial advantage to paying your loan off early. You’re practically borrowing money interest-free at this point, so you might as well hold onto your cash or use it for something else. (See also: 5 Debt Management Questions You’re Too Embarrassed to Ask)

Pro: You free up cash for other things

Your mortgage is $1,500 a month. Your car payment is $200 per month. Your student loan payment is $180. The minimum payment on your credit card balance is $250. If you’re locked into these payments each month, you may not have a lot of money left over for other needs or wants. Debt prevents you from having true financial flexibility. Pay those debts off early, and breathe easier knowing you’ve freed up a significant amount of cash.

Con: You could deplete your emergency fund

Your drive to pay off debt early may be strong, but where is that money coming from? It’s not easy for most people to pay off the $20,000 left on a mortgage in one fell swoop, for example. If you do have that much cash available, you need to make sure it’s not coming out of your emergency fund. It may feel good to pay off a debt, but when you have no money left to cover a medical emergency or job loss, you’re playing a dangerous game. It’s best to keep at least three months worth of living expenses on hand in cash, and avoid the temptation to raid it just to pay off a debt early. (See also: 7 Easy Ways to Build an Emergency Fund From $0)

For many people, carrying debt from month to month is physically and mentally exhausting. It weighs on you. And that’s totally understandable. Everyone has their own comfort level with debt, and if you simply can’t stand the thought of even a small debt burden, pay those loans off in full if you can. In many cases, paying off a debt early offers a mental and financial freedom. (See also: How Getting More Sleep Helps Your Finances)

Believe it or not, paying off debt early may actually hurt your credit. If you insist on always clearing debts in full long before they are due, you may cease to have enough credit history to get a favorable rating from credit agencies. As long as your debt burden is not too high, making consistent, regular payments on debts and paying bills on time is the best way to build strong credit. 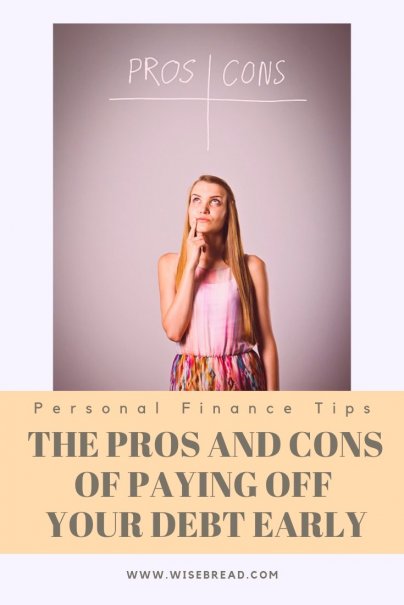 Release Pending for ‘Ever Given’

Release Pending for 'Ever Given'